The family closet: Bob Katter and his brother

Bob Katter is the new Sir Joh. A right wing nutter, most famous for his ludicrous conservative commentary. He is like Pauline Hanson or Wilson Tuckey on a good day, giving voice to the extreme conservatism which makes irresistible fodder for send up.

In some ways a person like Katter is less politically dangerous than savvier politicians -- those who publicly present as more moderate but are actually quite difficult to pin-down and challenge. At least Katter is often dismissed as just plain loopy.

But loopy or not, Katter has some pretty hurtful things to say about gay men and lesbians. Last week he made headlines for vitriolically encouraging people to "laugh at” and "ridicule" the concept of gay marriage. He also announced his campaign to reclaim the word ‘gay’; a perfectly “healthy adjective” that has become captive to the gay lobby. (Ok, that last bit was a bit ridiculous and funny as well as offensive.)

So it is interesting that this morning nearly every newspaper in the country seems to be carrying pictures of Carl Katter. Carl Katter is Bob Katter’s brother. And Carl is gay. On national TV last night, Carl commented on Katter’s expressed views about homosexuality, saying, ''It's hurtful, it's dangerous, it's damaging and it's really inappropriate”. He also said that should he meet the right man, he would like to get married, although Katter would be an expected no-show at the wedding.

So what is it about Bob Katter having a gay brother that excites the media? Part of me thinks it is just a fine opportunity to lampoon him. In one of Katter’s infamous quotes he stated that he would ''walk to Bourke backwards if the poof population of North Queensland is any more than 0.001 per cent''. Haha! Got you there Bob! That 0.001 percent was eating his cornflakes at your breakfast table.

But there is also something powerful about a family member of a public homophobe outing themselves. It reminds the world that no matter how much distance someone tries to create between themself and the scourge of gay humanity, every family has its closet. 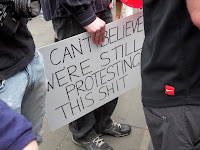 In her weekly column for the Sun Herald last week Miranda Devine somehow managed to link Penny Wong’s baby with the London Riots. How did she get there?
Penny Wong and her partner are having a baby = supporters of same-sex marriage are happy for her and wonder if Wong and partner would like to marry = gay marriage will undermine the traditional nuclear family, the “last bastion of bourgeois morality” = fatherless families = “You only had to see the burning streets of London last week to see the manifestation of a fatherless society”.

Get it? Perfectly logical equation.

It made me think of some other bizarre associations people in public places have made.

In 2006, former Federal Member of Parliament, Danna Vale used an eloquent leap of logic to connect the ‘race-debate’ in Australia with the RU486 abortion pill. She claimed Australia would become a Muslim nation within 50 years because we (‘we white-faced-Christians’) are aborting ourselves out of history. I suspect this comment may have been a little off-the-cuff and she probably paid for it with a temporarily eggy face. But with logic like this you gotta wonder why she was elected to the team of people who RUN THE COUNTRY!

Senator Barnaby Joyce is of course always ripe for a corker. He recently explained that he is against gay marriage because it would adversely affect his four daughters. Says Barnaby, "We know that the best protection for those girls is that they get themselves into a secure relationship with a loving husband, and I want that to happen for them. I don't want any legislator to take that right away from me."

So I accept this logic is perhaps slightly more stable than Danna Vale’s. But it is still a bit wobbly. No-one is suggesting Barnaby’s daughters can’t get married are they? As Alyssa Betts wrote in the NT Times yesterday, “It is not known if he was trying to say his daughters were all lesbians, or if, instead, their prospective male partners would rather marry men if given the option.”